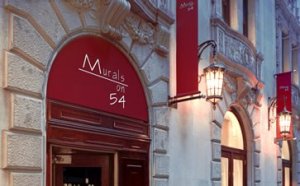 My best friend organized drinks with an established business woman who she thinks MM and I should meet this evening. She wanted to choose a place that would be sophisticated and nice without the typical happy hour crowd, so she chose Murals on 54 at the Warwick Hotel.

Murals On 54 is the Warwick Hotel’s recently refurbished dining room. It features Dean Cornwell’s original historic murals – hence the name. The dining room accentuates the murals which were commissioned by William Randolph Hearst in 1937 for The Raleigh Room, which was the restaurant inside his Warwick Hotel. This is also the reason for the murals showing Sir Walter Raleigh receiving his charter from Queen Elizabeth.

After a dispute involving his compensation, Cornwell painted obscene images in the murals. The large mural on the left side was covered for over 40 years because of the controversy – it showed a man peeing on the queen and another man peein gon Sir Walter Raleigh! Another mural pictured an Indian with a bare butt. Eventually, Cornwell painted over on of the images, but the others are still there.

The refurbishment Murals on 54 was headed by Pierre Court, who also redesigned the New York Palace, Villard Bar, Hôtel Plaza Athénée in Paris, etc. The interior is full of soft and warm fabrics with low lighting. Court wanted to accentuate the murals most.

The Italian menu includes antipasti, insalate, pasta, piatti forti, and contorni with a nice wine list. It is simple and to the point. A good place for a meet and greet or a business dinner…after all, it’s not every night you can eat & drink in the company of historic art. 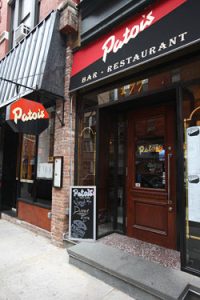 This past Saturday, MM and I went to dinner with one of my girlfriends and her family and some close friends for her birthday. Her sister’s boyfriend is one of the owners of Patois and Grotta Azzurra in Little Italy, and he was nice enough to host the dinner at Patois. It is an interesting concept to have an Italian restaurant connected to a French restaurant – and by connected I don’t just mean next to one another – they share restrooms…and desserts! 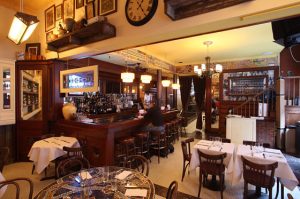 There are old standards on the menu (mussels, coq au vin, beet salad, pate, skirt steak), hard liquor at the bar, and a classic French bistro vibe. Service was not the most pleasant – the cranky male waiters made you feel as though you should in fact be serving them for allowing you in their restaurant. The food and our company made up for what they lacked, though. 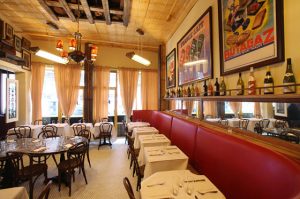 All in all, it was a nice experience with the big windows open for people to enter and a warm summery breeze flowing through. It did feel authentically European, but I think next time MM and I will have to try the Italian side to truly test that!

Peasant – not for peasants 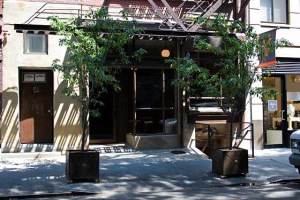 MM and I have a friend’s birthday party tomorrow night, and when they mentioned the name of the restaurant, Peasant, I was slightly nervous but definitely interested to learn more…

The concrete floor and the aluminum chairs send off warning signals that this place may truly be a bare minimalist restaurant with rabbit food on the menu, but when you get a little bit more familiar with Peasant you realize there is a quiet soul to the restaurant that excudes warmth and comfort. The whitewashed brick walls and bare wood tables don’t offer much hope. The brick pizza oven radiates heat, and the counter in front of the open kitchen, apricots, tomatoes and grapes takes you to chef’s home kitchen. The whitewashed walls and bare wood tables allow for the true stars of this restaurant to shine – the complex simplicity of their recipes.

Locals and hopeless romantics alike flock here for fine Italian food and the charming setting that’s ideal for close conversation over a candle-lit dinner. At a table or on a bench up front, you can order pizza margarita, fresh buffalo mozzarella and tender gnocchi. Chef-owner Frank De Carlo’s cooking shines, and he decided to change the formerly all-Italian menu to include English translations…the only Italian you will need to know is “Molto Buona!”

Where is the best place to get a good steak in NYC?(online surveys)

Bowlmor Lanes…because we should all Bowl More!

I planned a portion of MM’s party at Bowlmor Lanes because he wanted to do something that would be active and fun for all of the guys after dinner. Thankfully, MM isn’t into the typical “bachelor party activities.”
Bowlmor Lanes was very easy to work with – they have some very nice event planners who you can speak with on the phone and they will help guide you through your event planning. They have a limit of 8 people to one lane, which meant we had to reserve two lanes for MM’s party of 15. On a Saturday evening, each lane is about $230 for two hours. That seems like a lot at first, but when you divide it between everyone, its actually very reasonable.

The only sticky situaton was the fact that I was making the reservation and I obviously wasn’t going to be there that evening. They require prepayment by credit card or cash at least 48 hours ahead of time, which meant I had to pay and then count on the guys paying me back. Luckily, they guys were great and took care of me, but that could be a very frustrating thing for other party planning situations. Also, I found an additional $13 charged on my credit card a couple days after the party – when I called to find out what it was, they told me that the guys rented two more pairs of shoes. I thought that was shady, but I was fine to let it drop because Bowlmor emailed me a fantastic photo of MM and all of the guys!

Sweetiepie – the Wonderland of Manhattan

I recently got the news that one of my family members is pregnant – I can’t be more specific because she hasn’t shared the news with anyone outside of the family yet…BUT all of the baby excitement has gotten me thinking about where I would throw a baby shower! Of course, the party planner in me went right to whatever party I could organize in honor of the news…

One option could be the bizaar and magical Sweetiepie! If the giant bird cage (that you can actually dine in!), the pink marble floors, and the Alice in Wonderland vibe don’t suggest a happy, childlike fantasy world, I don’t know what else would. I think the reds, pinks, whites, and gold make this a lovely ladies’ hang out and the perfect spot to celebrate an expectant baby!

Although Sweetiepie also celebrates a more adult crowd with its hard cocktails – including some with absinthe – you can definitely stay away from that portion of the menu and go with more of a young, American menu complete with delicious chocolate cake! I mean, have you ever seen a more tempting dessert tray that screams “BABY SHOWER” than this…

Luckily, I have some time to think about baby shower venues, but Sweetiepie is high on the list!