Last night, my husband, my in-laws and I had dinner at the Soho House. It was my first time sitting down for a full meal in their dining room. I was told that the menu was good and the prices even better…either I was lied to or things have changed…

We ate around 8pm and the dining room was nearly empty. The lights were so low that we couldn’t read the menu and we had to pass the candle around. Our waitress was so overwhelmed by every question that I began to try to answer my in-laws for her. She had everything written down in her pad, but she was flipping through it like a maniac to find the detailed description of every dish we ordered. Our wine took 20 minutes to come to the table, and then they brought out some very random condiments and put them all over the table without explanation as to what they were for. As the other tables began to slowly fill, the service continued to go downhill. 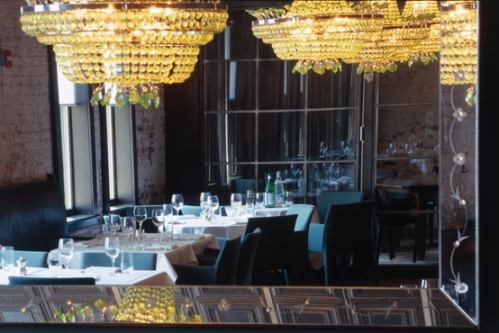 The menu was also very uninspiring. There was no real rhyme or reason to it – I couldn’t figure out  the cuisine or their motivation with the items. My husband was also disappointed that the crab cakes were no longer offered – the one thing he spoke highly of after his last dinner.

All in all, I think they need to revisit their restaurant. The ambiance shouldn’t try to be formal just because it is a members-only club. People go to the Soho House for meetings, drinks, casual lounging – the restaurant should reflect those purposes. It should be an easy spot to sit down and have a meal with extra good service and a delicious menu – those should be the areas in which the restaurant shines as a club-like experience. ♥